Push a model to Replicate

Learn how to package your own trained model using Cog and push it to Replicate.
By the end of this guide your model will have an interactive GUI and its own HTTP API. You'll also have the option to publically share your model so anyone can try it. 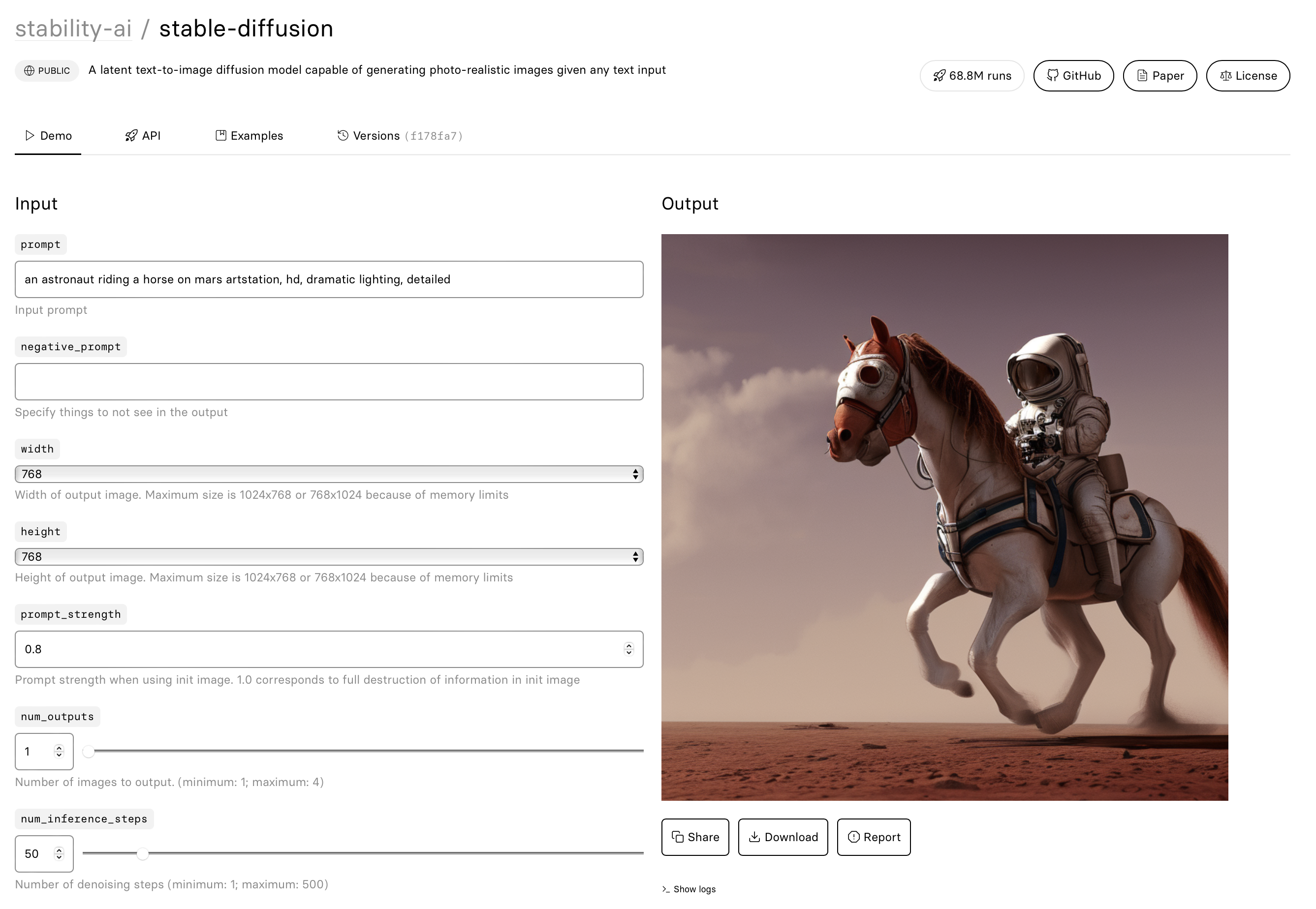 By the end of this guide, your model will have its own interactive GUI and HTTP API.
Contents

Pushing models to Replicate is currently in closed beta while we iron out the wrinkles. If you don't have a invite, come talk to us in Discord or send an email to team@replicate.com and tell us what you're thinking of making.

Create a model page on Replicate

Next you'll create a page for your model on Replicate. Visit replicate.com/create to choose a name for your model, and specify whether it should be public or private.

Cog is an open source tool that makes it easy to put a machine learning model in a Docker container. Run the following command to install it:

Refer to GitHub for more information about Cog and its full documentation.

To configure your project for use with Cog, you'll need to add two files to the directory containing your model:

Use the cog init command to generate these files in your project:

The cog.yaml file defines all of the different things that need to be installed for your model to run. You can think of it as a simple way of defining a Docker image.

This will generate a Docker image with Python 3.8 and PyTorch 1.7 installed and various other sensible best practices.

To use GPUs, add the gpu: true option to the build section of your cog.yaml:

Cog will use the nvidia-docker base image and automatically figure out what versions of CUDA and cuDNN to use based on the version of Python, PyTorch, and Tensorflow that you're using.

To run a command inside this environment, prefix it with cog run:

This is handy for ensuring a consistent environment for development or training.

With cog.yaml, you can also install system packages and other things. Take a look at the full reference to explore what else you can do.

Define how to run predictions

The next step is to update predict.py to define the interface for running predictions on your model. The predict.py generated by cog init looks something like this:

Edit your predict.py file and fill in the functions with your own model's setup and prediction code. You might need to import parts of your model from another file.

You should keep your model weights in the same directory as your predict.py file, or a subdirectory underneath it, and load them directly off disk in your setup() function, as shown in the example above. This will make it more efficient to load and easier to version because it will get copied into the Docker image that Cog produces.

You also need to define the inputs to your model as arguments to the predict() function, as demonstrated above. For each argument, you need to annotate with a type. The supported types are:

You can provide more information about the input with the Input() function, as shown above. It takes these basic arguments:

There are some more advanced options you can pass, too. For more details, refer to the prediction interface documentation.

Next, add the line predict: "predict.py:Predictor" to your cog.yaml, so it looks something like this:

To test that this works, try running a prediction on the model:

To pass more inputs to the model, you can add more -i options:

In this case it's just a number, not a file, so you don't need the @ prefix.

Now that you've configured your model for use with Cog and you have a corresponding model page on Replicate, it's time to publish it to the Replicate registry:

Your username and model name must match the values you set on Replicate.

Note: You can also set the image property in your cog.yaml file. This allows you to run cog push without specifying the image, and also makes your Replicate model page more discoverable for folks reading your model's source code.

Once you've pushed your model to Replicate it will be visible on the website, and you can use the web-based form to run predictions using your model.

To run predictions in the cloud from your code, you can use the Python client library.

Install it from pip:

Authenticate by setting your token in an environment variable:

Then, you can use the model from your Python code:

To pass a file as an input, use a file handle or URL:

URLs are more efficient if your file is already in the cloud somewhere, or it's a large file.

If your model returns a file, it will be represented as a URL in the output. To fetch the files, you'll need to pass an Authorization: Token <token> header to securely fetch the file, as documented in the HTTP API reference. (We're working on a better Python API for fetching files.)

For more details, head to the full documentation on GitHub.

You can also run your model with the raw HTTP API. Refer to the HTTP API reference for more details.